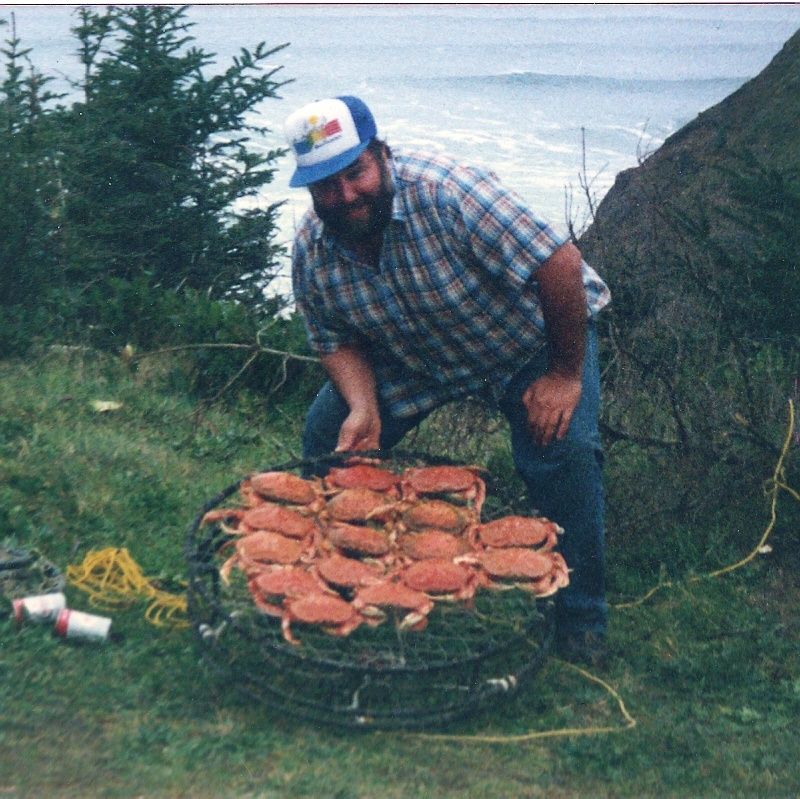 From the time he was born until his passing, Tom was a guy who always had time for fun. He loved people, life and making sure everyone around him was having a good time.

When Tom and Frankie married, he inherited 8 sister-in-laws and started to call each one of them "his favorite sister-in-law" (on the q.t.). He never disclosed who the actual favorite was, so that will remain forever a mystery. Frankie was the middle child, so he loved to tell people that he got the "pick of the litter", 4 better and 4 worse! Tom bought and sold a lot of cars during his first year of marriage - at least 25! Frankie said she would never know what he was going to drive home from work in! Tom built their first home on Alder Street, moving in a few months after they were married. They lived there for 9 years; and then he built their current house in 1972 just down the street.

Fun times with his family were filled with camping at Indian Park near Madras, Ocean Park in Washington, and Jake's Place near Billy Chinook Lake. He would always start the camp fire with gasoline - one of Tom's many "Old Indian Tricks!" He also loved hunting at Johnny's cabin. He would go every year; spend a week living off the grid; and spend the rest of the year talking about the fun he had there. Tom made many trips to Washington for Frankie's family events. He really enjoyed the Grab Family reunions at Lake Tapps, where he would bring the camper and spend the entire weekend. To this day, there are probably still coins in the lake that he would throw in for the kids to dive for. Everyone knew Tom at the Swiss Park in Bonney Lake. He welcomed everyone to his RV and made sure they all had a drink. He danced many foxtrots in the Swiss Hall; counting "one, one, two" to his partner while he was dancing!

Tom worked most of his life as a truck driver. His first driving job was at Shifton Plywood in Seattle. The first time he hauled a truck with a trailer he managed to run over the boss's front end of his sports car before he even got out of the lot! He worked there for two more years, so I guess his driving must have improved! When he moved back to Portland he started driving a truck for Georgia Pacific, then moved onto Willamette Hy-Grade driving a concrete truck. He purchased his own dump truck in 1974 and was an owner-operator dump truck driver until he retired in 2007.

Tom and Frankie did a lot of traveling after Tom retired. He loved to go on cruises; eleven cruises in all - going to Mexico, the Panama Canal, the Caribbean and to Canada and the New England states. But his favorite cruise was to Alaska; going a total of 5 times. He also drove to Alaska in 1997 with his friends, Les and Pat. When he returned, 6 weeks later, Frankie found out that he and Les had sunk the fishing boat and all the gear. He failed to mention it to her earlier because he said he didn't want to worry her. Frankie was a little angry at first, but then realized "no more boat, no more worries!"

Tom loved lemon pies and after his Mom passed, Kristin got the job of making him a pie for every Father's Day and Birthday. Then Dodie wanted to compete for the best pie. Tom said they were both perfect… as getting two pies was better than one! Both Dodie and Kristin loved going on rides with their dad. He would take them down "memory lane" to show them all the houses his Mom and Dad used to own, where he went to school, and places he hung out in his youth - telling them many memorable stories along the way. And at Christmas time, he loved to drive around to see all of the decorated houses in the neighborhood.

His all time favorite pastime was crabbing at Netarts Bay and spending time at the beach house he owned for 32 years. When he was in town he and his son in-law, Jeff, would be riding Sea-Doos on the Willamette River, riding 4-wheelers at Browns Camp or riding snowmobiles on Mt. Hood. Tom spent endless hours tinkering in his shop. He loved to have Jeff come over to help him diagnose, fix, or re-engineer a project. If a part didn't exist, Tom would have it made. If Jeff told him that the wrench was too long to fit, Tom would fire up the pipe cutting saw to make it fit! Tom was always looking for ways to make everyone's life easier. If anyone ever mentioned they were looking for something, Tom would usually show up with it - recently found at a garage sale.

Tom loved flying to California with Frankie on St. Patrick's Day to see Dodie and Christopher, his other son-in-law. Christopher would make them a traditional Irish corn beef and cabbage meal; and a long-time family friend, Geri would come to join them for the feast. He would sometimes drive down (10 hours from door to door) with a truckload of wood for their wood-burning fireplace. Dodie would always save special projects for her Dad to do while he was there because he loved to fix stuff. And she always paid him with fresh lemons from her tree.

Tom spent a lot of time with his granddaughters; watching Annabelle play softball, talking to Frannie about her job, and countless traditions at the beach. Annabelle loved it when Grandpa took them to feed the trout at the fish hatchery. He would always eat the fish food and say "it tastes just like M&Ms!" Frannie remembers many "rides" around the beach house neighborhood in a trailer he built for his 4-wheeler. Grandpa would never let them board without a ticket, so they would have to run back into the house to make one. And every year at Easter, they would color 6 dozen eggs together to give to everyone.

Richard, who was always referred to as "Brother," was always getting early morning phone calls to see what project he had going on. It didn't matter that it was 6:00 a.m. because Tom was on "Tom Time." They had so much fun talking about days past and teasing each other about who was the "smart one." A favorite story about Tom and Richard when they were kids is when their parents would drop them off at Sunday school, giving them each 25 cents for the collection. Tom suggested that they should instead sneak to Paulson Drugs and spend part of the money on chocolate sundaes. This worked out a few times, until Richard spilled chocolate on his white shirt. Then the gig was up and no more Sunday morning treats! Another fun memory was when Tom, Richard and Sue went camping in Long Beach, and for an "undisclosed reason", were forced to leave the campground. They ended up driving around in the middle of the night looking for a new place with Tom leading the way. After a long search, Tom drove into a field with waist high grass. They parked their rigs, and he reassured everyone this was the yard of a "guy he knew." The next morning he got out, looked around, and much to his surprise realized he had no idea where they were!

In his last few years his health issues became a problem, and he had to slow down and pay more attention to his doctor's orders. There were many health scares that were quite serious, but then a few days later he would be out on the Willamette River with his Sea-doo or up on a ladder balanced on the back of his pickup, painting the shop moldings!

Tom suffered a severe heart attack on October 4th while in the hospital waiting for tests and a possible surgery. He was revived with CPR and remained alert during his time in Critical Care. The nurses were all amazed by Tom's humor and charm. He gave his family an incredible gift by giving them 10 more days to spend with him. He was still looking out for them, up until the end.

Tom loved his family, his friends and all his many toys. We will miss him so much, but know that he is now in a peaceful and pain-free place. Tom was baptized Catholic on October 4th by Father Fred from Providence Hospital. Our prayers were answered and we can be comforted to know that he is now with God.

"Another day, another opportunity."

"It's an old Indian trick."

"Last one to bed gets the bottom!"

"Do you want some wind pudding and walk-about sauce?"

"When laying sod, green side up!"

"Don't cut the cord!" (while using the electric lawn mower)

"I took my Get Smart pills today!"
To order memorial trees or send flowers to the family in memory of Thomas William Butler, please visit our flower store.