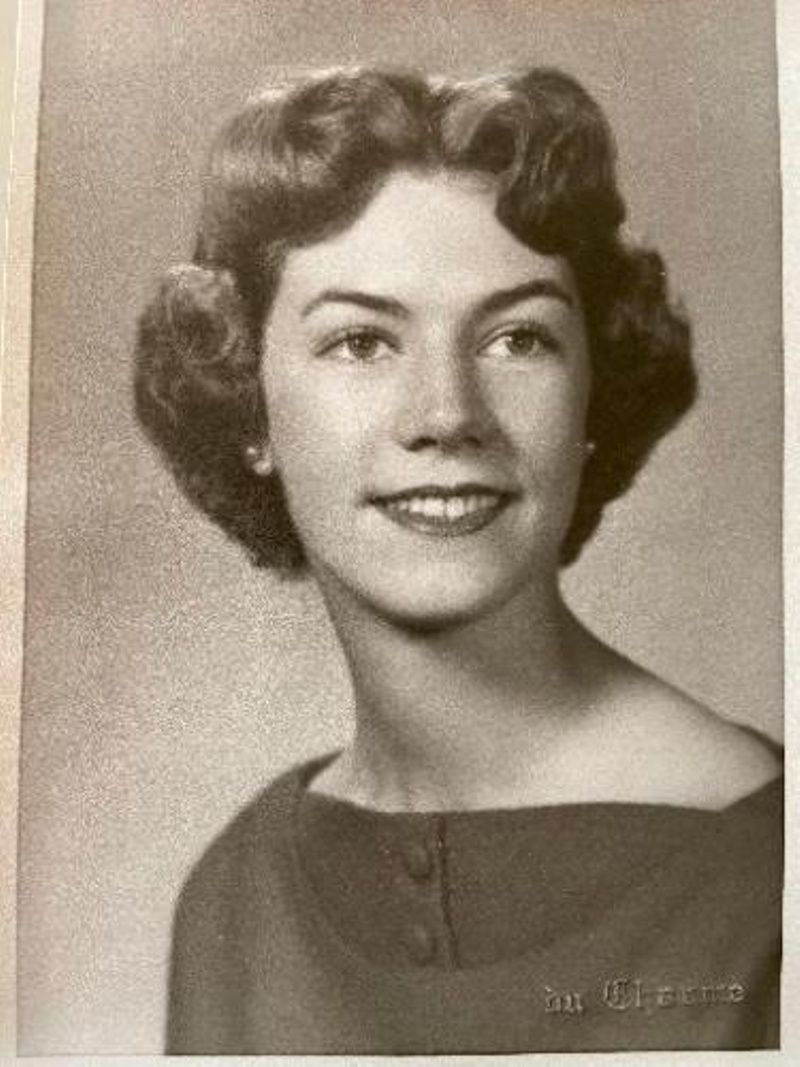 The passing of Marcella, 81, leaves a void in the lives of her loved ones, who know that her kind and compliant nature flourished on a fundamental strength of character.

Born and raised in Portland, Ore., Marcella was the oldest of Guy and Ruth (Berry) Jubitz's three children. A popular brunette who thrived under strict parents, Marcella was a cheerleader, homecoming queen, member of Lincoln High School's Rose Festival court, and never lacked for male attention. Among the admiring neighborhood boys was Peter Murphy, who tried to catch her eye as he walked to the local Catholic high school. Although he was in college by the time Marcella graduated, he was home for her graduation party. Marcella's boyfriend was late to the celebration, but not Peter — by the end of the night, Marcella had a new boyfriend, a romance that would last for 63 years.

Marcella attended the University of Colorado and, after her family moved to the Bay Area, San Francisco State. In order to accept Peter's invitation to spend Christmas with him and his family in Portland, her mother insisted that she stay with her aunt. When Peter proposed, her mother suggested that her daughter, who loved big cities, might not be happy in Eugene, where Peter had moved after graduating from Notre Dame University to run the family business.
As someone whose priorities were always clear, Marcella studied Catholicism because it was important to Peter. They married in June 1960. Right before the ceremony, she stood outside St. Mary's Cathedral in her wedding dress, indulging in the smoking habit she'd developed in high school. She turned to her father and said, "That's it. My last cigarette." And it was.

Towing a trailer behind their '58 Impala, the Murphys drove to their two-bedroom apartment in Eugene where Marcella spent the 1960s giving birth, eventually, to five children, and making frequent trips to the laundromat. Every day, Peter and Marcella each dropped a quarter into a coffee can, and what used to be their cigarette money (he, too, gave up the habit at their nuptials) became the Clean Diaper Fund. On their second Valentine's Day in Eugene, they went to Sears and bought a washer and dryer.

The sports-loving family rooted for the Oregon Ducks' football and basketball teams. Baseball was Marcella's favorite sport, and she remained a fervent fan of the Pacific Coast League's Eugene Emeralds even after she was bonked by a foul ball. She also liked to watch her kids play sports, and was an enthusiastic — and uninjured! — spectator of soccer, football, little league baseball, softball and swimming.

Marcella was active in Eugene's Junior League, and played tennis and cards. A wizard with the sewing machine, she made clothes for her brood, and accessorized the girls' hair with the fancy bows she used to decorate presents no one wanted to open because they were so beautiful. She was famous for her meat loaf, flank steak, macaroni salad and scalloped potatoes. Marcella was always trim, even though she often was caught eating mayonnaise out of jar, and pats of butter right from the fridge. Marcella would eat an avocado any time, anywhere.

She defied nature in other ways as well — a sunbather since girlhood, she had beautiful skin well into her later years, thanks, she swore, to her committed relationship with Oil of Olay. From her beach blanket on shore, she watched her family frolic in the Oregon surf at Manzanita and Gearhart, and at Del Mar in California.

She supported Peter's increasing influence in Republican politics, and took the kids to visit the sights when he had meetings in Washington, D.C. They attended the inaugurations of Ronald Reagan and George H.W. Bush. Eventually, the family trips would include grandkids — the Murphy "party of 24" went to Hawaii, and to New York to see the Macy's Thanksgiving Day Parade and Marcella's beloved Rockettes. Marcella and Peter traveled the world, to London, Zimbabwe, Rome, Monte Carlo, Acapulco and Ireland.

In 1988, Peter and Marcella bought a second home in La Quinta, Calif., and after he retired a few years later, they moved to California full time, spending winters in the desert and summers in Del Mar, where Marcella got her baseball fix watching the San Diego Padres play at Petco Park. She also rooted for the Yankees, as well as the Notre Dame football team, because if Marcella was anything, she was a team player. Just ask Peter.

Marcella Murphy is survived by her husband, Peter, her children Peter, Mark (Tracy), Amanda (Mike) Langdon, Anna and Marcella, and by 16 grandchildren. Marcella just missed the birth of her fourth great-grandchild. Her siblings, Ray Jubitz and Kathy Gage, also survive her.

The funeral Mass for Marcella J. Murphy will be Jan. 7, 2020 at St. Mary's Cathedral in Portland, where she was married.
To order memorial trees or send flowers to the family in memory of Marcella Jubitz Murphy, please visit our flower store.