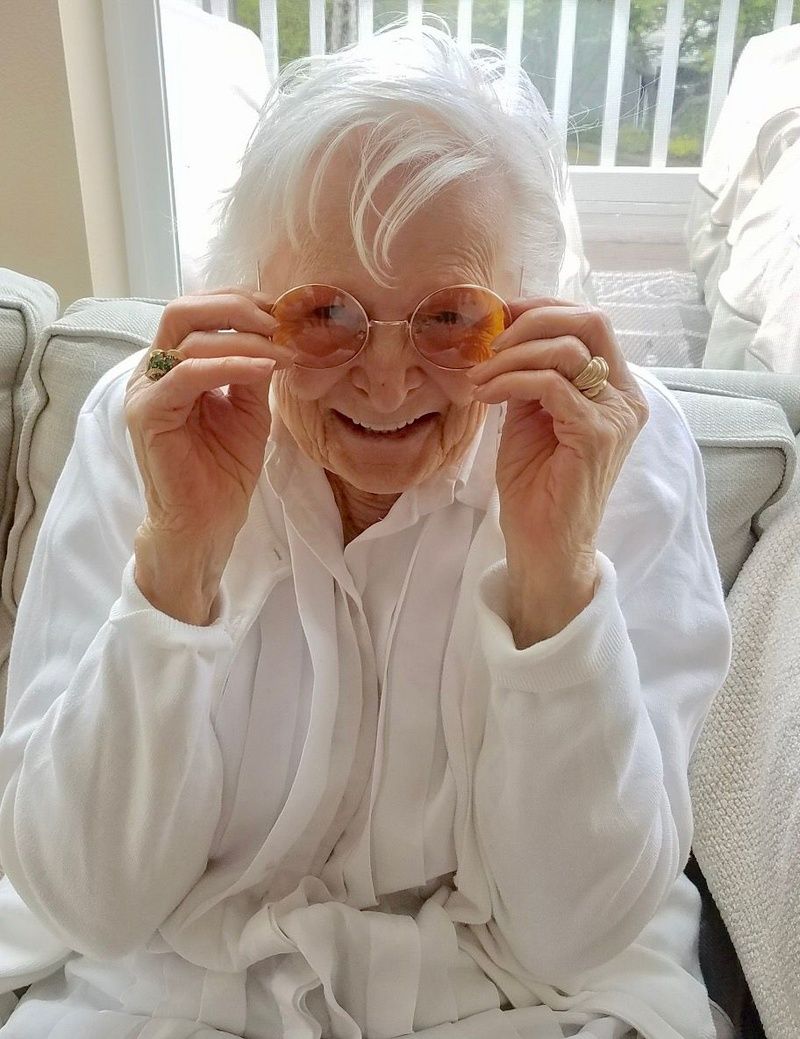 You know who is having the BEST day today? This beautiful lady here. Loretta McKinnon Maloney closed her eyes for the final time on earth on January 6, 2022 after 100 years of living and loving and, through the grace of God, opened them up for the first time to the glory of Heaven. We smile when we think of her greeted first by her savior, Jesus Christ, and then, we are sure, by an absurdly large gathering of family and friends that have been awaiting her arrival.
Loretta McKinnon was born on November 8, 1921 in Seattle (White Center area) and the family moved to Portland at the end of her eighth grade year and she became a student at Commerce (now Cleveland) High School, graduating in 1939. Following graduation, she was employed in secretarial and other support capacities including a short, but interesting, time with the FBI in its Portland office. She was working in the office on December 7,1941 when that office became one of the first to learn of the attack on Pearl Harbor. A month later, Loretta married Arthur Maloney on January 3,1942 and she spent the next 54 years in a host of different capacities.
She was wife to Art, mother to sons Dennis and John and daughter Laurie Schwenneker and sister to brother Jack McKinnon and sisters Connie Schommer, Evelyn Leary and Sally Hobin. She was grandmother to Kelly Mooney (husband Rick) and Mike Maloney (wife Shannon), Pat Maloney (wife Brittany) and Kevin Maloney (wife Aubrey). She was great grandmother to Connor, Katie, Rory, Lucy and Sabine Maloney and Zach and Alexis Mooney and mother-in-law to Lynne Hughes Maloney, Joanne Maloney and Bill Schwenneker.
She was a proud, and renowned, hostess to all the events that arose out of Art's 30-year tenure at Jantzen until his retirement in 1979 as vice-president and a member of the company's board of directors. She kept a book on what she served at each party so that she would never repeat the same meal to the same guest. She loved her time and the friends she made as a member of Waverly Country Club and was especially proud of achieving four holes-in-one during those years. Gin rummy and cribbage were her games of choice. Most days, even before Art's retirement, would start with one or the other contests often being completed by 6am.
She had a fabulous sense of humor as evidenced by the recent day when her son Dennis was driving her somewhere and told her "Mom, you look great!". Loretta immediately replied "stop the car". She continued. "Go back and sell this car and buy a convertible….if I look this good, I want people to see me".
We celebrate a beautiful life fully and well-lived. Thanks, Loretta, for showing all of us how to be strong, how to laugh, how to love, how to enjoy a good cocktail, how to hit a ball true and how to raise a family.
Until we see you again.
To order memorial trees or send flowers to the family in memory of Loretta McKinnon Maloney, please visit our flower store.