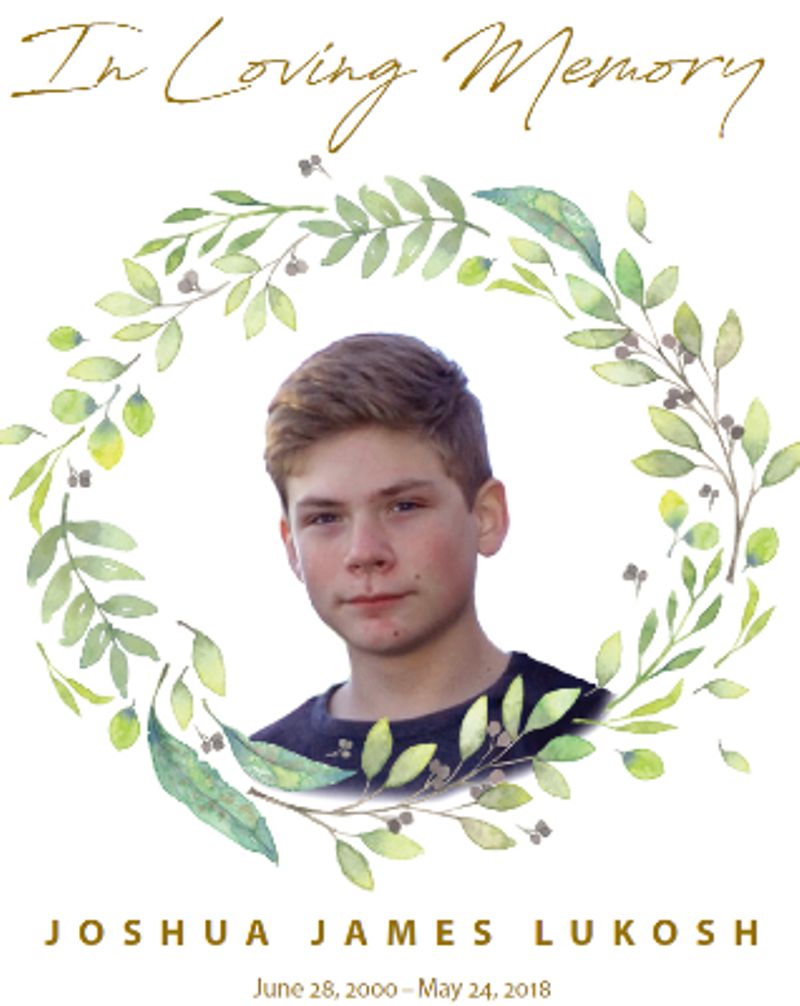 Joshua James Lukosh was born June 28, 2000 in Portland, Oregon. He attended Holy Redeemer Catholic School from Kindergarten through 8th grade, was an Honors student at Central Catholic High School, and then briefly attended Roosevelt High School. Josh worked for Portland Parks and Recreation as a lifeguard for two years, and volunteered for five years at the St. Vincent de Paul food pantry at Holy Redeemer Parish. He also enjoyed assisting with hospitality services for the homeless at St. André Bessette Church in downtown Portland. His passions included soccer, bodybuilding, and nutrition. In addition, he was particularly fond of dogs – expecting his family to know not only the names of his friends, but the names of his friend's dogs, too. He was the master of random acts of kindness for his many friends, acquaintances, and strangers, as well. Josh died tragically on May 24, 2018 by suicide. There will be a Mass of Christian Burial at Holy Redeemer Catholic Church Thursday, May 31, 2018 at 10 am, and a private burial at Mt. Calvary Cemetery in Mt. Angel, Oregon on Friday, June 1. Josh is survived by his brother, Aaron, his parents Leslee and Robert, his grandparents Jack and Judy, his great grandmother Violet, his uncle Doug, and his cousins Caroline, Christopher, Paige, Thomas, Michael and Clare, as well as the many friends who he frequently referred to as brothers and sisters. In lieu of flowers, donations to Josh's favorite charity are greatly appreciated: St. Vincent de Paul Society, Holy Redeemer Chapter, 25 N. Rosa Parks Way, Portland, OR 97217.
To order memorial trees or send flowers to the family in memory of Joshua James Lukosh, please visit our flower store.