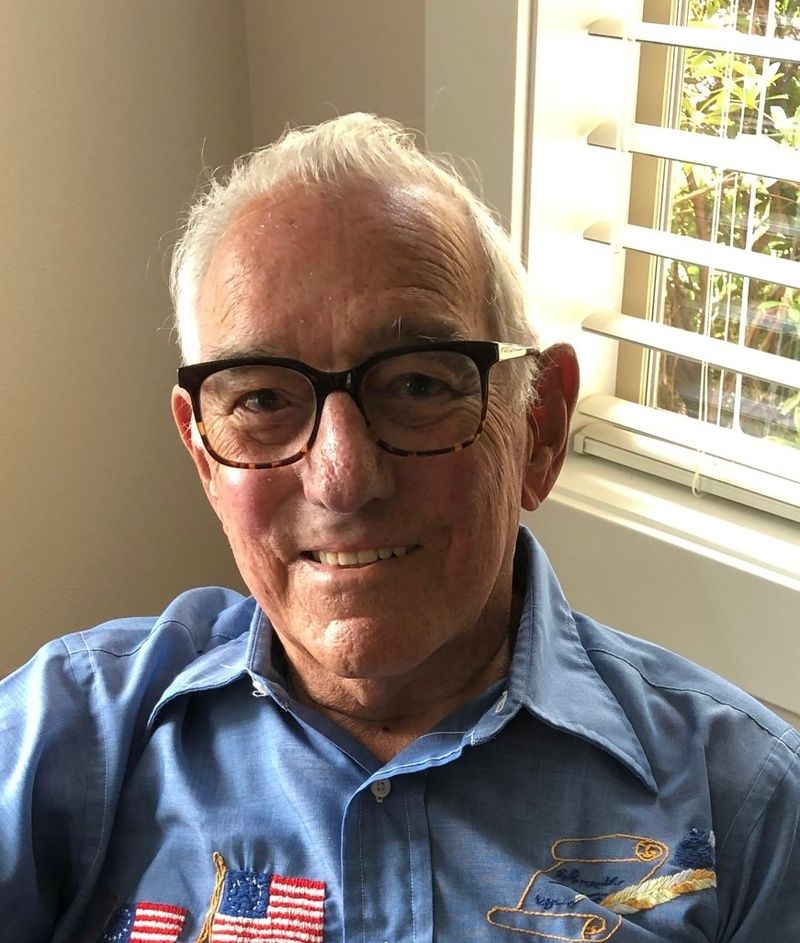 John Daniel "Dan" Rego was born in Oakland California on October 20, 1927, the same day as his twin brother Dave, to John and Meriam Rego. Dan attended Luther Burbank Jr. High and Oakland Technical High School. Dan attended the University of California at Berkeley for one year, but a hernia forced him to withdraw early, and once completely mended, he went to work for Howell Rexall Drugs at 18th and Broadway in Oakland as a stock boy.

In September of 1948, Dan and his best friend Roger Vaughn attended a dance where Roger introduced him to a pretty girl he knew, Nilda Peruzzo. Neither Dan nor Nilda were good dancers, but they must have connected because at the end of the evening, she gave him her phone number. In the days following, however, he didn't call her because he was afraid that she, already being 21, would want to go for a drink, and he would not be 21 for another month. But fate was not to be denied because in November 1948 he took the Cal Football Rooters Train to LA to watch the Bears play USC. Nilda happened to be on the same train and Dan, not remembering that they had already met, again thought she was pretty and sat next to her the whole way. After the game on the way back, Dan, true to his goofier side, purchased a big sombrero before boarding the train and when Nilda spied him on the platform wearing the hat, she hid. But Dan was nothing if not tenacious, and he found her on the train, and love blossomed. This time, he did call her the next day and for the next 8 months repeatedly asked her to marry him, but unsure of his financial stability as drug store clerk Nilda said no. Finally, in one of the earliest indications of Dan's true calling as salesperson par excellence, he convinced her and 7 months later in November 1949, they were married.

Shortly thereafter in 1950, Dan was hired by Universal Pump, a division of Jacuzzi Bros, Inc., where Nilda's father worked. That same year the first of their six children (and only daughter) Jackie, was born. In 1951 Dan was tapped to open the new Jacuzzi office in Portland Oregon, so he and Nilda and the baby moved north to start a new home where over the next 12 years the five boys would be born.

With a growing family to support, Dan traveled across the west selling whirlpool bath equipment first as a sales engineer for Universal, then as a sales representative for Jacuzzi Research, Inc. He sold the first Jacuzzi portable whirlpool pump in North America. Dan had a keen head for business and in time became the National Sales Manager for Jacuzzi Research, establishing branch operations for company showrooms, creating sales policy, developing sales training, and monitoring branch operations, selling into national accounts and honing his sales and customer service skills while building the Jacuzzi business across North America.

In 1969 Dan's job with Jacuzzi was relocated to the Bay Area, and the family moved to Moraga where they quickly immersed themselves as active members of the community. In 1975, after 25 years with Jacuzzi, Dan left the company and at the age of 48 started a new career selling life insurance for John Hancock. "I was scared to death," he recalled later. "I didn't know an annuity from an endowment, but I knew I could sell." With six children – one in medical school, one in college, three in middle and high school and a daughter just recently married – Dan knew he had a lot to learn quickly. And like everything else he did, he approached the new challenge with organization, detail, and focus. In his first six months, Dan sold a million dollars worth of insurance and was on the agency's leader board. Sheer tenacity was enough to get started, but to really be successful he realized he needed to study. While continuing to sell, Dan went back to school and earned both his CLU and his ChFC certifications and over the next 20 years, built a very successful insurance practice.

Dan retired in the mid-1990s and he and Nilda moved to the Moraga Country Club, but retirement for Dan just meant that he could channel his non-stop energy into other pursuits. He bought a golf cart and spent many hours on the links with his golf buddies Ed, Fred, Ron, and Norm. A long-standing member of Kiwanis, Dan was elected president of Moraga Kiwanis and Lt. Governor of Kiwanis International. He was active in local politics and ran for the local town council. Dan served as Chair of the Moraga Parks and Recreation Commission and President of the Moraga Parks and Recreation Foundation, and during his tenure, he chaired the development of the Moraga Commons bandshell, a place for the whole community to gather, listen to music and enjoy a day in the park. Dan was also President of the Moraga Historical Society, President of Hacienda Seniors, and in 1999, Dan was voted Citizen of the Year in Moraga for his "tireless and exceptional record of service to the community."

Dan was a craftsman and an avid woodworker and passed on that love of working with his hands to his children. When they moved to Moraga in 1969, Dan didn't let the large empty, weed-filled lot scare him, and proceeded to build patios, decks, pergolas, outbuildings, and furniture to turn their house into a functional and beautiful home. When grandchildren started arriving, Dan began building wooden toys for them, and they were so good that he made dozens more to sell at the Alameda Crafts Fair.

Dan and Nilda moved back to Oregon in 2015 to live at Willamette View in Milwaukie. While there, at the age of 88, he discovered new talents for working with paint, glass, wood, acrylics, and other media that resulted in a volume of work which is unparalleled for an octogenarian artist. Dan continued to make toys for his great-grandchildren and had some in progress when he passed away.

Dan and Nilda loved to travel and went all over the world including Canada, St. Petersburg, all over Europe, Australia, New Zealand, and South America. They loved to spend time in Hawaii where Dan's father was born and where his great grandfather immigrated to from the Azores.

Dan was known by all for his keen fashion sense which dictated that his shirt, sweater, pants, socks, and shoes all be the same color (even if bright yellow or lime green) as well as his great sense of humor, and he knew how to put people at ease with a joke or witty banter. His sons and grandsons all knew the embarrassment of introducing Dan to a new girlfriend to whom he would say "I don't care what he says, I think you're nice," or "Are your eyes bothering you, because they're killing me!" His affinity for spoonerisms endeared him to the servers at Willamette View who all knew what Dan wanted when he ordered a "sup of coup."

Dan loved to volunteer and knew how to work a crowd, whether selling hamburgers at a St. Mary's College basketball or football game or selling raffle tickets at the annual auction for Phi Sigma Kappa fraternity at UC Berkeley where his sons were members, for which he was awarded an Honorary Phi Sig membership.

For all his activities, awards and accomplishments, Dan loved nothing more than to be around his family. You could often hear him say whether on the back deck at home or on the lanai in Hawaii sipping a scotch with one of his sons or daughters-in-law that there was nothing better in the world than to be with family.

His was a life well-lived, and at the end of the day, Dan's legacy is a close-knit family and dozens of friends that loved him and will miss him dearly.