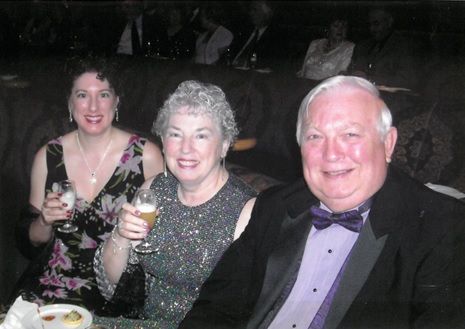 Dexter Lee Haney, age 76, died peacefully on 4-25-18 at 4:25 pm, after a valiant nine-year struggle against aggressive prostate cancer. His wife, son, daughter and daughter-in-law were all with him at the time of death.
Dexter was born at home to Bryce Enoch Haney and Lois June (Ellis) Haney on 8-23-1941 in Toledo, OR, the second of their two sons. As long as she lived Lois always referred to Dexter as her baby boy. When Dexter was 3 his father was drafted into World War II where he served in the Philippines as an MP. Lois and the boys lived in Kansas with family while Bryce was in the service and Lois worked as a "Rosie the Riveter" for Boeing. After the war the family moved to the Pacific Northwest and settled on a Dairy Farm near Brush Prairie, WA. In the 1950's they purchased a 56 Acre dairy farm in Hockinson, WA where Dexter helped his parents run the dairy. He attended Hockinson grade school and graduated from Battle Ground High School, where he was a star football player. After graduation Dexter ran the dairy before deciding he wanted to go into sales. Dexter was very proud of his cars, he had a 1956 Corvette and had the first 1963 Corvette Stingray in Portland, it was that car that snagged him his dream girl. In December of 1961 Dexter was set up on a double-blind date with Mary Reynolds a young nursing student. When a friend asked her the next day how the date went she said it was "OK", they asked her if she would go out with him again she said "no, I don't think so". The friend said "I shouldn't tell you this but he has a brand-new Corvette on order", Mary decided to give him a second chance and by the time the car arrived they were engaged. Much to Dexter's chagrin they had to wait two years for Mary to graduate from nursing school before they got married. Finally, the day arrived and they married on August 29th, 1964 in the Catholic Cathedral in downtown Portland. They were married for almost 54 years. That same day in Hayden, ID their close friends Ed and Sheri Swafford got married, the two couples celebrated their anniversaries together for many years until Ed passed away. In 1966 Dexter and Mary's first child Tiffani Dannette was born. Dexter always told the story of the Dr. bringing the baby out to see him and saying "she has all of her fingers and toes", he said he had never even thought that she wouldn't before that. Dexter continued to work in appliance sales eventually opening Haney TV & Appliance with his father in 1969. They sold the business in 1978. After many years of trying for a second child their son Derek Anthony was born in 1978, a true miracle child. Dexter was thrilled to have a boy and enjoyed attending all of his sporting events. Over the years Dexter and Mary traveled extensively, they always took the kids on a summer vacation, usually to Disneyland or back to Minnesota to visit family. They also went to Acapulco, Jamaica, England, Scotland, Wales, Italy, Hawaii, Canada, Florida and numerous Caribbean cruises. One of their last cruises was a transatlantic that went from Florida to Copenhagen with stops in the Azores, Ireland, France, Belgium and Holland. Dexter retired in 2004 after many years in the appliance business where he worked as both a salesman and buyer. Dexter was a devoted son who lovingly cared for his mother in his home for many years and missed his parents until the end. Family was the center of Dexter's life, his wife, children and grandson meant everything to him. He was thrilled when his son Derek married Caitlin Rutherford in 2015 and was over the moon when their son Grayson Asher was born in 2016. Grayson was the light of his life.
Dexter is survived by Mary his loving wife of 53 years, his daughter Tiffani, son Derek, daughter-in-law Caitlin, grandson Grayson, brother Gary, close friends especially the Swafford family who he considered to be family and his Cocker Spaniel Titus.
A rosary will be said at 10:00 followed by a funeral mass at 10:30 May 4th at St. Therese Catholic Church located at 1260 NE 132nd Ave, Portland, OR 97230. A reception luncheon will be served followed by internment at Mt. Calvary Catholic Cemetery.

Acknowledgements
Our burdened hearts have been truly touched and lifted by the outpouring of love, sympathy and prayers we have received from each and everyone of you. Please accept our sincerest and deepest appreciation.
The family would like to thank the staff of Pacific Gardens who treated Dexter and his family with such kindness and caring. They are truly doing God's work.
In lieu of flowers the family requests donations be made to the American Cancer Society.
To order memorial trees or send flowers to the family in memory of Dexter Lee Haney, please visit our flower store.