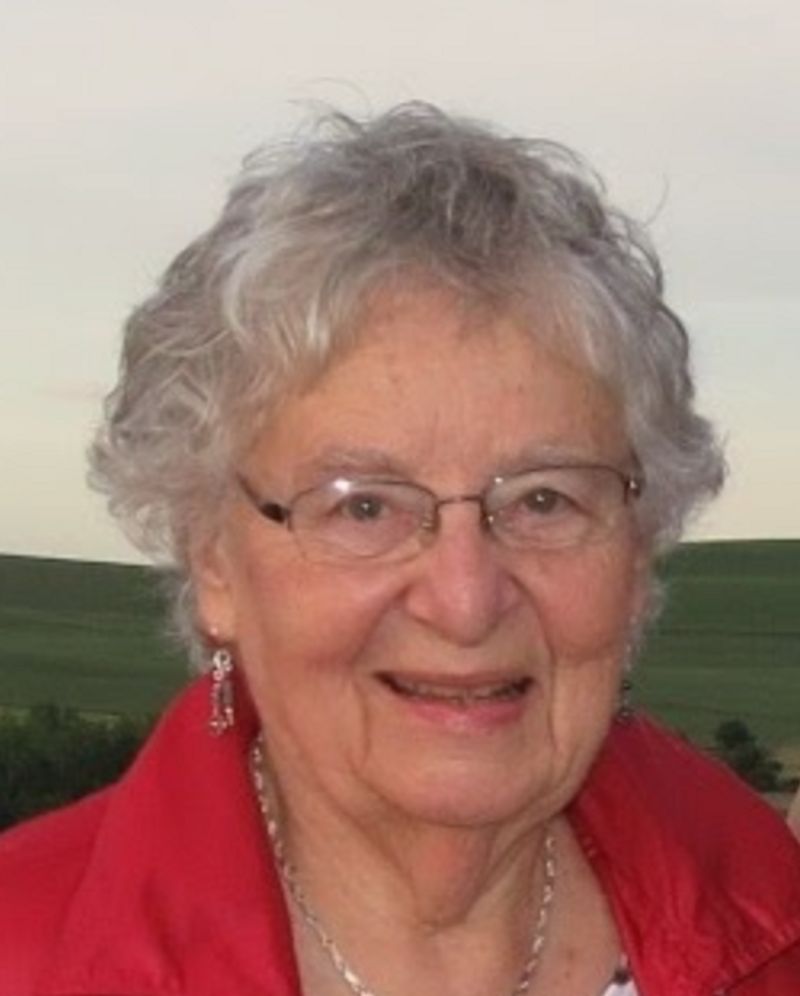 Carolyn Marie Vistica was born March 7, 1934 in Portland, Oregon, the cherished daughter of Herman N. and Mary Ann (Bernard) Waltz. From 1935, they lived on his family farm in St. Paul, Oregon. Her only brother, Ted, was born in 1938. Mary and Herman worked hard to take care of their family through the Great Depression. Herman grew hops. Mary cleaned, gardened, made her own butter, and canned vegetables for winter. Carolyn liked to climb big trees. She had a dog she named Boxtop, and there is a photo of her next to a sheep. They had a goat, chickens, a cow and a horse named Ned who met Herman at the fence every day so he could ride his rounds of the farm. Carolyn was close to her mother's family, especially the Miller cousins, who often visited the farm when she was little. These relationships deepened throughout their lives.

From early childhood, Carolyn was an avid football and basketball fan, introduced to the games by her father. He made a drawing of a football field, and using a walnut (or something) to represent the ball, they listened to games on the radio and followed the plays, moving the walnut up and down the paper gridiron. Herman had played basketball for Mount Angel Prep in the 1910's. He taught Carolyn that game, too, and all his life they followed Notre Dame and Oregon football, and the Portland Trailblazers.

In about 1941, the Waltz's moved to a Portland house they had built before the Depression on Malden Avenue, in St Agatha's Parish. Carolyn attended grade school there. They moved to Salem when she began 8th grade, about 1948, and she attended three years of high school at Sacred Heart Academy in St Joseph's Parish. In high school she had an interest in architecture, but being female was denied a mechanical drawing class she wanted to take. A teacher told her, "That's only for the boys." Her father built several houses, and her uncles, Father John Bernards and Father (later Monsignor) Theo Bernards built churches and schools, so she was exposed to the process. In 1951, her family moved to Milwaukie, and she had learned enough from her father to draw the blueprints for a new house they built there. She had a lifelong interest in building design, from St. Peter's in Rome, to the work of Frank Lloyd Wright, to every detail of her own homes. Carolyn went to St Mary's Academy in Portland for her last year of high school.

After graduation, she found work at an office in Portland and commuted by streetcar from Milwaukie. She met James Vistica at the Chancellor's Club, a social club for single Catholics, and they were married at St. John's on October 17, 1953. Jim, a Korean War veteran, got his degree at Portland State on the GI Bill, and went to work for Portland Natural Gas. The company paid for Jim to take additional education in accounting. In time, he rose to the position of Controller and Assistant Treasurer. Carolyn worked until she had her first child, Tom, in 1955. Over the next eight years, four more children completed their family: Bob, John, Barbara and Mike. The house they built on Jack Street in Milwaukie was very busy. Carolyn tried to stay alert to her children's individuality, and to support their talents. Bob remembers she drove him to OMSI near the zoo for extra-curricular science classes in elementary school, and he won a competition that resulted in one of his projects going on display there. Carolyn encouraged Tom, Bob and Mike to take specialized classes at the Owen Sabin Occupational Skills Center during high school. Tom won the top scholarship for drafting in his senior year. Bob won a new award covering all the offered trade skills in his year. Mike studied agriculture one year and automotive in his senior year. All of the children have had successful work lives.

Devoted to her kids and her husband's needs, Carolyn could also fix just about anything around the house, and she sewed, painted, gardened, and cooked. She made her own drapes and upholstered furniture. She learned how to frame artwork and bought the tools she needed to do all these things. At various times she took tole painting and watercolor classes, and studied china painting with her Aunt Dele Miller, and cousin, Janice Altenhofen. She had creative talent and put her heart into every project she took on. Carolyn also volunteered time at the Albertina Kerr Center resale shop in Portland. She learned about antiques there, and started collecting at yard sales almost every weekend, often with Dolores Wolf. While Dolores looked for teddy bears, Carolyn looked for good deals on solid wood furniture, vintage printed linens, antique Christmas decorations, yellow ware pottery, green Depression glass, and an array of old prints, toys and knick knacks. She had a good eye for quality, and became an expert in many areas. Her home was tastefully and uniquely decorated with her many finds. At Christmas she gave out special items she had picked up throughout the year with particular people in mind. She always labeled these gifts as "Something Found".

By the late 1970's, Carolyn and Jim had downsized slightly and built a new house near Christ the King. Carolyn and Jim were active members of their church and lived their faith. They volunteered time and donated resources at the St. Vincent de Paul Society Food Pantry. They made lifelong friends there, working closely with Deacon Jim Pitman, among others. Carolyn's kitchen sometimes resembled a factory when she was buying and packaging food for the Pantry. For years, Jim, and then Carolyn walked over to the church office every Monday morning to help count the Sunday collection. (She had done that as a teenager at St. Joseph's in Salem, her uncle's parish.) She served with the Altar Society and helped with church decorations at Christmas and Easter, often working with her friend Teresa Kolln.

A major portion of Carolyn's life was given to selfless care taking. She cared for both her parents, nursing her father in his final illness, and then bringing her mother, who suffered with Parkinson's Disease, to live with Carolyn's family for her last two years. Not long after Jim's retirement, Carolyn noticed the first signs of Parkinson's in him, and she bravely managed his increasing challenges throughout their retirement years, until his death in 2005. Very soon after, their daughter Barbara was diagnosed with cancer which she fought for nine years. For all that time, Carolyn was deeply invested in Barb's care, and Barb spent her last days at Carolyn's, dying in 2013. Carolyn had cancer twice herself. A co-worker at Albertina Kerr insisted she see a doctor for what turned out to be a serious melanoma on her arm, which she survived, most likely because of her friend's intervention. Years later, during Barb's illness, Carolyn was diagnosed with breast cancer. She opted for a radical treatment that allowed her a quicker recovery. She had no time to be sick.

Carolyn rarely passed on a chance to travel. She often visited her brother Ted and his wife Carol in Los Angeles. She and Jim visited New York City and Hawaii for his work, and at home they participated in organized Volkswalking on the weekends. For pleasure they saw New England, Orlando, St. Augustine and Savannah, Branson, Singapore, Spain, Portugal, and Mexico City. After taking their family to Puerto Vallarta, Carolyn organized several return trips with friends. Jim and Jackie Scherrer, Teresa and Dick Kolln, Dolores and Cliff Wolf, Carol and Carl Halladin, and Gloria and Ed Bettey joined those trips to Mexico. They rented a house with most of these same friends twice a year on the Oregon Coast, relaxing, sight-seeing and cooking for each other.

In the 1990's, Carolyn and Jim began spending a month or so every winter in Desert Hot Springs, CA. Josephine Di Martini was central to the group of friends who made that trip at the same time. Pat and Steve Spitkowski, Billy and Bill Clumpner and Pat and Jack Cronin were among those who joined them there. One of their favorite places to stay was called the Swiss Health Resort run by Karl and Ursula who were very supportive to Carolyn, especially after Jim's passing. Carolyn continued to travel to the desert for more than ten years after that. She became close friends with two couples from New England and looked forward to seeing them there. Ted and Carol, her sons Tom and Bob, and her daughter Barbara all visited her in the desert at different times. She and Barb both loved the peaceful Sunnylands Center and Gardens in Rancho Mirage. Carolyn also took many short bus tours through these years, mainly within the Northwest, with Barbara Horch or Helen Jablonowski in an organized group called the Philadelphians. And lots of Tuesdays she rode the bus with friends down to Chinook Winds Casino to have lunch and try her usually lucky hand at the craps table. (She had a formula.) She made three trips to Alaska by cruise ship: one with her cousin, Janice; one with son Bob and family; and one with daughter Barb, son Mike and his family. She went to Maine for granddaughter Emily's wedding, and in her down time took her IPad and went by herself to Portland, Maine to explore. There was also a big tour of Italy, made difficult by her knee trouble, but typically for her, Carolyn "sucked it up", (her words), and found ways to see everything. She loved new experiences.

Carolyn decided to sell her home in 2018. It had become too much for her to manage. She moved to the nearby Springs at Clackamas Woods where some friends already lived and where she made new friends and enjoyed the amenities. She decided to return to church at St. John's Parish, where she and her parents were both married, and which was founded by her uncle, Father John Bernards. She considered this a homecoming.

Carolyn Vistica is survived by her children: Thomas Vistica, Lincoln City; Robert Vistica, (Victoria Skakel), Portland; John Vistica, (Terry Frank), Seattle; and Michael Vistica, (Julie), Damascus. She leaves six grandchildren, three with spouses; seven great-grandchildren; her brother Ted Waltz, (Carol Colin); Rita Rose Vistica, SNJM, her sister-in-law; a large extended family and dear friends. Family was almost everything to Carolyn. She was there for her children every step of the way, readied by experience to offer good ideas, strong opinions, and all kinds of help, if any was needed. Sometimes none was, because she and Jim raised five strong individuals, good people ready to reach out to help others themselves, and each with an exceptional work ethic. She loved her son's spouses, delighted in her grandchildren and great-grandchildren, and she was loved by them in return. This was evident in the way her family came together to help her, especially these past months, doing their best to honor her intentions and last wishes. Their loving kindness has been a tribute to her strength and spirit. Carolyn's passing out of our lives is a heartbreaking loss, but for her, it is a triumph.
To order memorial trees or send flowers to the family in memory of Carolyn Marie Vistica, please visit our flower store.