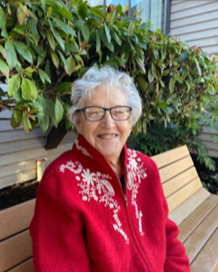 We are gathering today to celebrate our beloved Andjelka, mother, grandmother, great-grandmother, daughter, wife and friend to so many.

Andjelka loved life and people. She loved to attend church events, birthdays and frequently entertained her friends and family. She had a gift for creating delicious food with very few ingredients and she was a masterful baker.  She was an avid believer that a healthy spirit comes from a healthy body and even at the age of 90, she continued her exercise routine! She loved walking barefoot on grass and when she was still able, she enjoyed long walks on the beach.  Her enthusiasm for life was infectious and her sense of humor stayed with her to the very end.

Given her humility, her refusal to complain and  her incredible sense of fun, it would be easy to miss what an extraordinary, yet difficult life, she had .  She was born in 1930 in Vares, a small mountain town in central Bosnia as the youngest daughter of the Korol family. She and her older brother, Jan,  lived with their parents in the nearby town of Zenica during their younger years.  When their father, Ivan, developed Parkinson’s disease, Jan and Andjelka helped their mother, Rosalia, care for him.   After the death of her husband, Rosalia, decided to gather her two children and modest belongings and start a new life in Poland.  This was possible because after WWII, the Western lands in Poland that were previously inhabited by Germans were offered to Bosnians with Polish heritage.    In 1946, they boarded a transport train and made the 700 mile journey along with cattle and pigs until they reached the small Lower Silesian town of Boleslawiec. In this medieval town on the river Bóbr, Jan and Andjelka continued their educations.

Two years later, in 1948, Andjelka met a fellow Bosnian, Antoni, a handsome and charming young man who a year later became her husband.  Soon after, their first child, Rudolf was born and, over the years,  they grew their family with four more children, Karolina, Daniel, Brunon, and Matylda. In 1974, Andjelka and Antoni decided to go on another adventure this time to the USA with a quick stop in their place of birth, Yugoslavia. They moved to Portland, Oregon where they lived for the remainder of their lives.

As the years passed, four of her children along with their families moved to be close to Andjelka and Antoni. Her heart was the fullest when their youngest child, Matylda, came to visit Portland. Throughout the years, Andjelka continued to be the matriarch of the family, hosting their holiday gatherings and preserving their Polish and Bosnian traditions. She enjoyed the Oregon Coast , and,  whenever possible she and Antoni would visit their beloved Kah-nee-ta where she enjoyed the sun and swimming.   She traveled  abroad as well, visiting  Jerusalem, London, Rome, Medjugorye, and Novi Sad where she spent time with her two youngest Grandchildren, Natalia and Dragan. Even after moving to the Beaverton Lodge in recent years, she continued to explore Oregon and was so excited when she visited the National Neon Sign Museum in The Dalles.

Andjelka will be laid to final rest along her late husband, Antoni at Mount Calvary Cemetery in Portland, Oregon on October 31, 2022.

To order memorial trees or send flowers to the family in memory of Andjelka Drozdek, please visit our flower store.
service information.pdf
Open

The service will take place on the North side of Mt. Calvary, across Burnside from the main office.